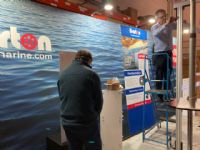 Christian and Dermot Doing Stand Preparations in the Barton Warehouse

Barton Marine will host live demonstrations, competitions, and giveaways in stand F64 at the RYA Dinghy Show 26-27 February in Farnborough.   ﻿

A Laser Dinghy being stored against a garage roof using Skydock

Barton Marine launched two new innovations to the world at METSTRADE in Amsterdam last week.   The Stanchion Bullseye and SkyDock are both designed to enhance boating experiences, on and off the water.  ﻿

The stand all set up at the United States Sailboat Show

Discover the huge Barton US range of sailboat hardware at The United States Sailboat Show in Annapolis from the 14th to the 18th October.﻿

A Barton Block running past the Tower of London

﻿Darren Tuff, Barton Marine’s resident long distance runner has successfully completed the London Marathon dressed as a Barton Block, whilst achieving a great time of 04:43:27.  His valiant efforts have raised £1745 to date for Wednesday Junior Sailing, who help as many children as possible get out onto the water for a mere £1.